Cell Phones Can Cause Visual Damage

CELL PHONES CAN CAUSE VISUAL DAMAGE

In a recent scientific study conducted by a team of researchers from the Technion, a possible link between microwave radiation, similar to the type found in cellular phones, and different kinds of damage to the visual system was found. At least one kind of damage seems to accumulate over time and not heal, challenging the common view and leading the researchers to the assertion that the duration of exposure is not less important than the intensity of the irradiation. The researchers also emphasized that existing exposure guidelines for microwave radiation might have to change. 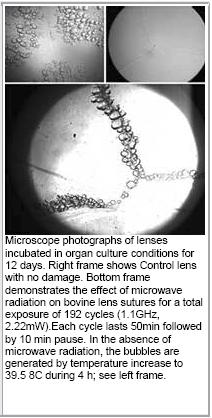 The effects of exposure to electromagnetic radiation have long been a subject for debate among scientists. The technological developments of the last twenty years such as cell and cordless phones, wireless communications, monitors and even high voltage lines have all been studied as potential risk factors for cancer and other diseases. Less known to the public, but still a matter of some extensive research, is the study of the effect of microwave radiation on the visual system and especially on the lens of the eye. The basic motivation for this research came after World War II when it was suspected that radar operators suffered a greater risk of developing cataracts (a condition characterized by clouding in the natural lens of the eye). Although these particular suspicions were eventually shown to be debatable, they were the trigger for the first guidelines for exposure to electromagnetic radiation. Moreover, the eye as our natural radiation detector is the obvious choice for investigating the effects of electromagnetic radiation upon the human body.

In more recent studies on animals the effects of microwave radiation as a risk factor for cataracts have been established and have helped determine the guidelines put forth by the International Commission on Non-Ionizing Radiation Protection (ICNIRP) in 1998. A common measure for microwave radiation is the Specific Absorption Rate (SAR) which is the average power density absorbed in a given volume per average weight density (Watt/Kg). This is the standard used by cell phone companies, among others, to measure levels of radiation. When microwave energy impinges upon body tissue, part of it is absorbed and converted to heat due to ionic conduction. This heat manifests itself as a temperature increase inside the tissue. Past studies in animals have shown that even a slight increase in temperature close to the lens (as low as 3 degrees Celsius) can increase the risk of developing a cataract. With a low enough SAR the local temperature in the lens might never increase to that level. A less common measure is called Specific Energy Absorption (SA), and is defined as the energy density absorbed in the tissue divided by its weight density. While SAR is the measure of the rate microwave radiation is absorbed by a tissue, SA is the measure of the total energy absorbed. This difference played a significant role in a recently published study on the effects of microwave radiation on the visual system.

In the study conducted by researchers in the Rappaport Faculty of Medicine at the Technion, and published in the journal Bioelectromagnetics, a new link has been found between microwave radiation and the development of cataracts. Eye lenses of one-year-old male calves obtained from a slaughterhouse were exposed to microwave radiation – one eye from each pair used for control. Each exposure session lasted about two weeks. Both control and exposed lens were kept in an incubator at a constant temperature. During this period each exposed lens had experienced up to 2mW of 1.1GHz radiation virtually around the clock, and each hour it was exposed for a 50 minute session followed by a 10 minute break. During one of these breaks, every 24 hours, it was tested optically and compared to the control lens. During the short (5 minutes) optical test, the lens was not exposed to radiation, but when exposed, its average temperature was maintained constant in an incubator.

The experiment yielded a number of interesting results:

1. Exposing the lens for a prolonged time to microwave radiation (in the frequency and intensity described above) caused macroscopic damage affecting the optical quality of the lens. This damage increased as the experiment and irradiation continued and reached a maximum level after a number of days. When the exposure stopped the optical damage began to heal gradually. Interestingly enough, a similar maximum level was observed when the irradiation intensity was reduced to one-half the original, except that it took twice the time.

2. On the microscopic level a different kind of damage occurred. Tiny “bubbles” were created on the surface of the lens. The bubbles were formed by irradiation with microwave and were not the result of a heat created throughout the lens. The researchers have speculated that the mechanism responsible for the creation of the bubbles is microscopic friction between particular cells exposed to electromagnetic radiation. Contrary to the macroscopic damage, the microscopic damage did not show any signs of healing and continued to accumulate during the course of the experiment.

Although the researchers are cautious about interpreting the results of the experiment and its possible implications to public health, it seems that prolonged exposure to microwave radiation similar to that used by cellular phones can lead to both macroscopic and microscopic damage to the lens and that at least part of this damage seems to accumulate over time and does not seem to heal. Professor Levi Schächter, who worked on the research, told IsraCast that attention should be paid not only to the Specific Absorption Rate (SAR) but also to the total energy absorbed by the tissue (SA), which is not currently under supervision by the appropriate regulative authorities. Implying that the duration of exposure is not less important than the intensity of the irradiation.